As fall is well underway here in Alaska, moose are in the middle of their rutting season. I wanted to take some different kind of pictures for the weekend  so instead of my habitual landscapes I decided to go moose "photo-hunting" trying my luck at "wildlife photography". I thought about the location for a while :

I picked a really popular hiking area less than an hour from Anchorage (Alaska) called Williwaw Lake Trail, it was the ideal location, with open areas, moose use to human but not too much humans on the trail and close enough to allow me to go home at night. 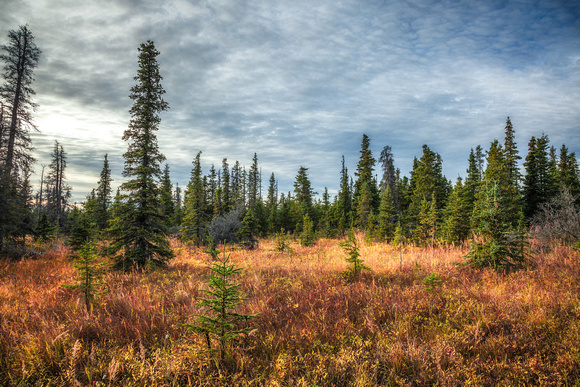 A perfect spot for rutting and well for taking pictures of moose rutting.[/caption] I headed to Glenn Alps Trailhead way on Saturday and started hiking my camera ready to fire, at first using the trails to approach the area I had selected and then following moose trails, trying to identify areas where the moose were the most active (more scats, more "lying down spots" etc...). I quickly spotted a cow heading towards a group of trees in the distance so I followed her. As I got closer I heard a few "male callings" coming from the bushes. I then slew down, going slowly from trees to trees to not scare away/disturb the moose that were now close by. 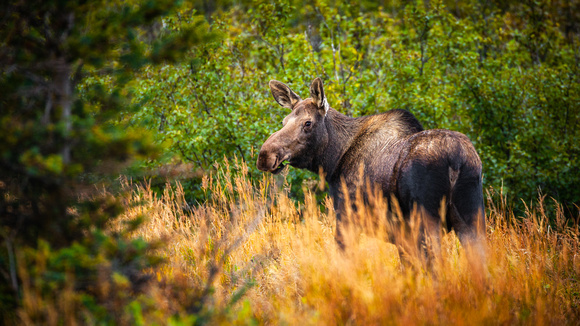 untitled-4288-EditHere is one of the trouble maker, a few times, while two male were at safe distance to each other the female would go towards the "challenger" as to tell them, come on fight for me :D. Which would result on the bigger male running towards the challenger to chase him

The first scene I arrived to was really busy, three males were a few hundred feet away from each other as if they were gauging their potential strength, probably deciding if they had a chance in case of a confrontation. There were two medium bulls and one big bull. The big bull was circling three females, keeping the two medium challenger at a safe distance, never charging but intimidating them by  standing between the females and them and shaking his impressive antlers at them. As I was trying to go around the scene to get more shots I found a fourth bull with a broken antler, probably a younger one according to the size of his antler. He obviously didn't stand a chance against any of those bulls so he was hiding behind trees, standing still. At some point, on his way to push back one of the challenger, walked on the other side of the tree I was hiding behind. I could hear him breathing, feel the ground trembling as he was walking and well even smell him. As he walked by me he gave me this unforgettable look. He held his gaze long enough for me to go through the amazement phase and then grab my camera and shoot it. One of the highlight of the weekend for sure, it was so intense. 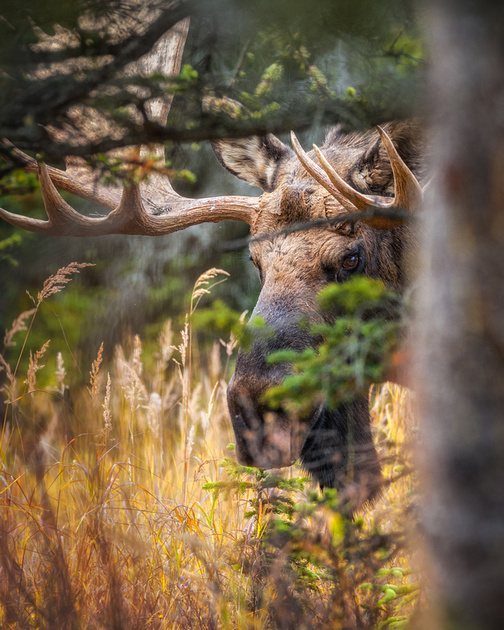 untitled-4459-Edit-2An amazing moment as I was taking pictures of some moose yesterday. The bulls were fighting for the cow, I was hiding behind trees trying to capture the scene discretly when the bigger bull charged the younger bull. He then stopped a few feet away from me at the other side of the tree and gave me that look. 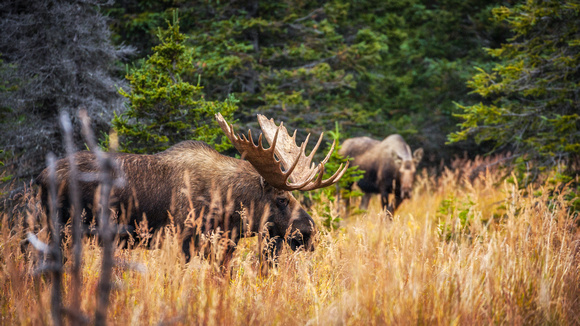 Here, the bigger bull is standing between two cows while a Challenger is standing a few hundred feet away, hidden in the forest. [/caption] As the hours passed by, the bigger bull's fake charge became more threatening, he actually chased the medium bulls a few times. But each time he would, the other bull would come closer to the female, a never ending circle. Rutting is exhausting for a bull of that size as he is constantly challenged by other bulls and while I didn't experience any actual fights, he probably had to fight a few times to keep his female(s). In the evening and as the light was getting too dim to shoot, the two medium bulls gave up and went on their separate ways while the main bull stayed with the three females. 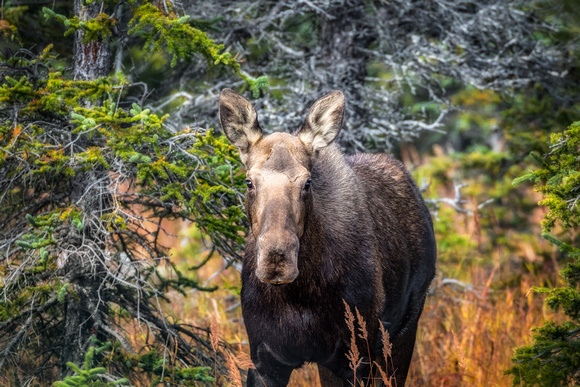 untitled-9338-EditThe remaining cow on the second day. She seemed to be more interested in the challenging moose. She would constantly come back to him, forcing the bigger bull to go and push him to a safe distance.

The remaining cow on the second day.[/caption] When I came back to the area the day after, the young male with a broken antler was hanging out with a female, he didn't show any interest in her whatsoever, despite her teasing behavior. I left them lying on the ground, resting. I went on trying to find the other bulls, one of them was higher in the alpine area, he was aggressively chasing a female breaking into fast run to catch her, she would escape and hide in the bushes for a few minutes before running away again. They were probably getting really close to mate but there was no cover for me and it would have been pretty dangerous to stay in the middle of that mating dance so I went on to find the third bull. 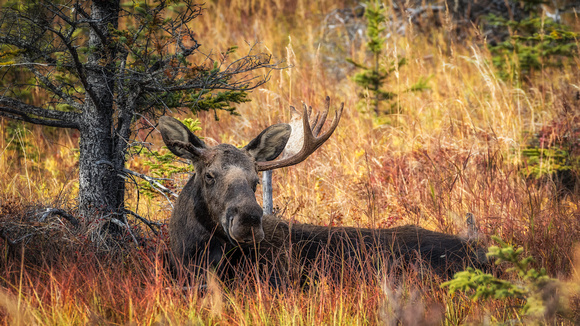 untitled-9481-Edit"Broken antler", this little fella was hanging out with one of the female during the day which was surprising to me as he was really thin and probably not able to fight another bull, a juvenile maybe? When the bigger bull came back at the end of the day, broken antler left without hesitation, a fight against the bigger bull would not be wise.

As I was going down the hill I found him hidden in the trees not far from where 'Broken antlers' and the cow were lying down. Feeling that something was going to happen, I found a spot close to the female, as I was certain that the bigger bull would come and join her. He did come by a few minutes later, 'Broken antler' left as soon as he arrived : no point for him to start a fight with those tiny antlers, no chance for him this year. 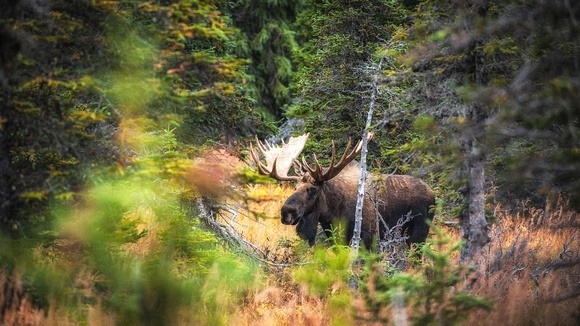 untitled-4440-EditBeing close to the bigger bull was truly impressive. His antler are so big you can see his neck going from one side to the other at each steps. Yet he is able to break on a really fast run when one of the other bull is getting too close. 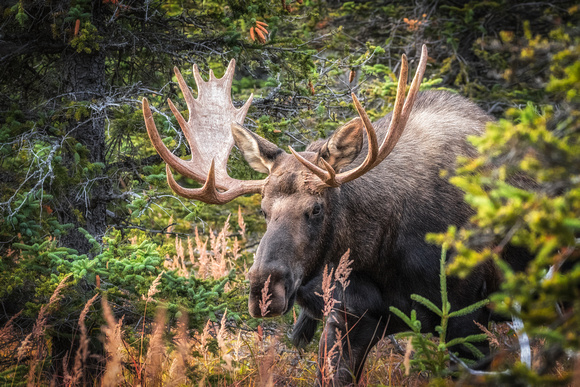 untitled-9552-EditThe challenging moose doing his little dance, trying to go around the bigger bull in order to reach the female. While not as big as the bigger bull his size was decent but his antler way smaller.

As the big bull was getting closer to the female, one of the medium bull from the day before appeared out of nowhere. Began then another 'chasing dance', the challenging bull trying to get closer to the female and the bigger bull chasing him away. Except this time, the bigger bull was breathing heavily, moving with more difficulty than the day before. The female didn't help as she seemed more interested in the challenger. She would make move towards him forcing the big bull to chase the other bull further. This little game lasted for a couple of hours, I could see the bigger bull getting slower and allowing the other bull to get closer. They were moving towards an area with more trees making it more difficult to shoot but I really wanted to see the end of the story so I followed them.

untitled-4440-EditBeing close to the bigger bull was truly impressive. His antler are so big you can see his neck going from one side to the other at each steps. Yet he is able to break on a really fast run when one of the other bull is getting too close. 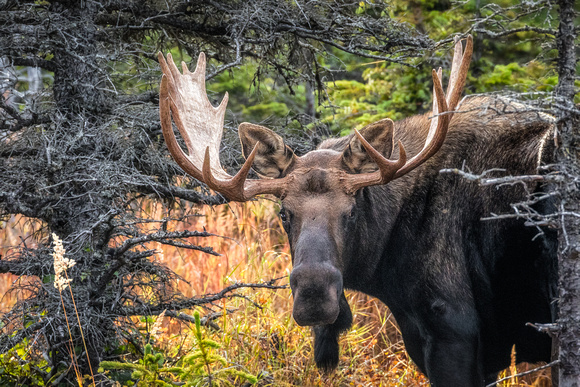 untitled-9587-EditLater in the afternoon, the bigger moose seemed more and more tired of running around kicking the challenger out. The challenger seemed to notice and got more ambitious getting closer and closer to the female.

At some point the three of them were positioned into a triangle less than an hundred feet from each other. The bigger bull, for the umpteenth time, moved towards the challenger, only this time the challenger faked a charge. The bigger moose was probably getting too tired to have a straight confrontation, he turned back and ran for about a quarter mile into the deep forest, there he half collapsed onto the ground and lied on his side, his impressive antlers resting on the ground. He was breathing hard and probably needed a long rest, the challenger had succeeded, the female was now his. I went back to try to find the challenger and his new mate but they were already gone in the bushes so that concluded my time spent with this group. 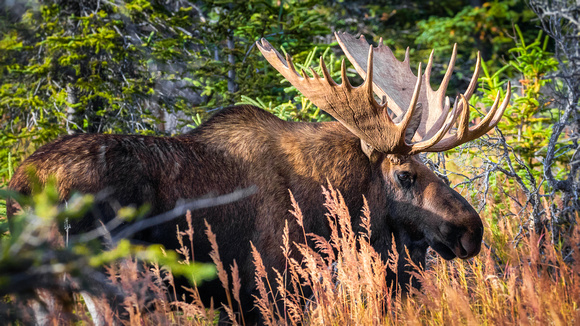 untitled-9639-EditContinuing with the moose serie I shot last weekend. Here is a general view of the bigger bull, a truly impressive animal. He ended up loosing his female after a younger bull harassed him to exhaustion, a few minutes later he loudly lied down, panting heavily, laying flat on his flank. The rut period is difficult for a big bull like this one as they have to fight off many pretenders. 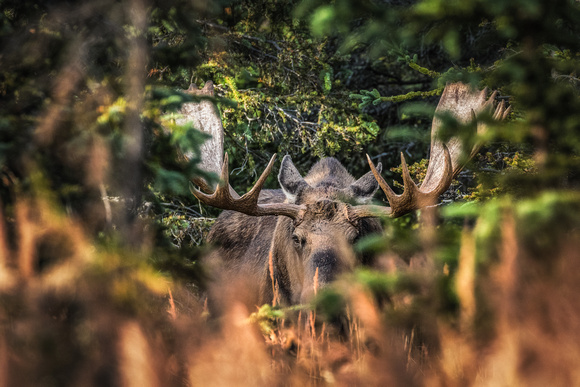 untitled-9693-EditI followed the bigger moose to see what he was going to do. He ran through the forest to a dense area and lied down/collapse heavily, panting... He first lied down with his head up but soon put his head on the ground, exhausted. I then tried to find the new couple but they were already pretty far down the valley. That concluded my two days following this group.

It was truly amazing to follow the moose around, and I didn't regret spending two days in their company. Being really quiet and always hidden behind trees, giving them space allowed me to have little to no impact on their behavior. A couple of times the bull went by the tree behind which I was standing only giving me a look but never stopping or changing his trajectory so that made the experience even more enjoyable, like watching with a hidden camera. 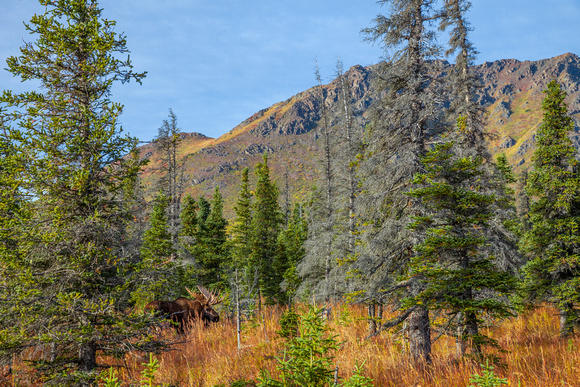