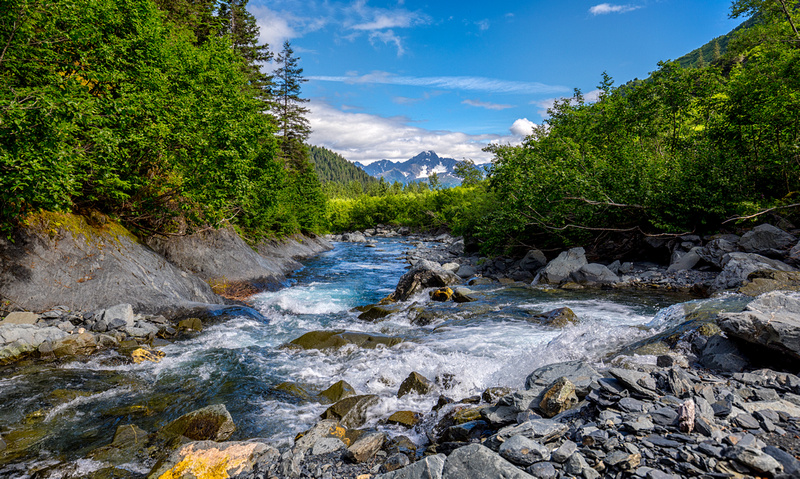 Bear glacier is a beautiful glacier west of Seward, usually accessed by plane or boats. I wanted to find a way to reach it while hiking so I looked at some maps and found a way using Spruce Creek to avoid too much bushwhacking. I hiked this route at the end of July so conditions might change but here is a route description in case you want to try it out. There is a gallery at the bottom of the page for motivation :D. The trace displayed below isn't a GPS track, just a hand drawn line of what I did.

First of all let's point out that one area of this route is really exposed (part 2 of this topo), it isn't long but it is a vertical scree with little traction and a 50-100 feet drop at the bottom so a fall would be ... bad. Let say that you should be very experience to attempt this hike and good at tricky water crossing (the first part of the hike is in the water), very steep scree climbing and route finding. Now for the description I will cut it in stages :

Park at the bridge and around there and begin to follow the river, there are a few private property along the river so make sure to stay in the high water mark of the river (for more details : http://www.adfg.alaska.gov/index.cfm?adfg=wildlifenews.view_article&articles_id=477) it is pretty straight forward, on some part you can hike on the gravels on some you have to walk in the river... Using good water shoes would be a good idea especially since you can just ditch them at the bottom of the scree and not carry them for the full trip. Make sure that if you start in the morning, you keep in mind that the volume will double in the afternoon... As you might get stuck otherwise. So all is good until the avalanche area or the first waterfall, then begin the tricky part, and trickiest of the trip. 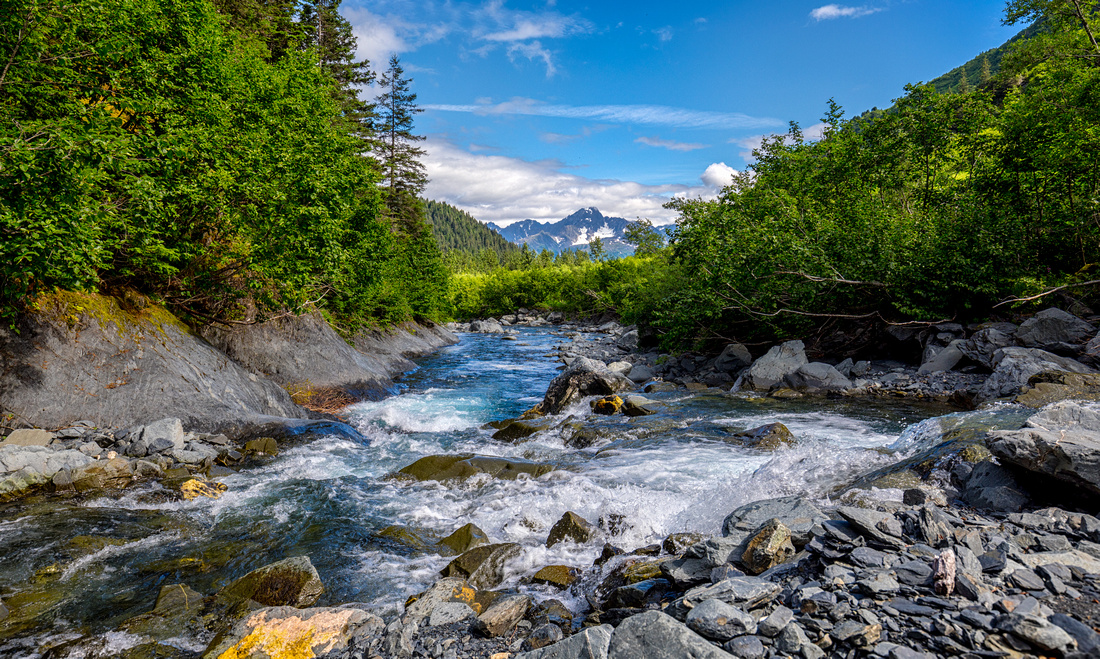 untitled-3427-EditHere is the view from the river, the easier route to reach the alpine area is to follow or well walk in the river for the first 4 miles. The water is a tad cold but that was quite magical especially since it is that time of the year when Salmons are going up the river too!

2 The tricky part You have two choices here :

I choose the first solution on the way in and the second on the way back. Both are tricky but the second option is really exposed, while the first one just involve a nasty river crossing. I do not have pictures to describe the first choice but it is pretty obvious as there are not many spot suitable for going up. Look for a little stream going down a scree on the lower end of this tiny valley. You could also climb the wet grass just before the wall of the main waterfall if you can't cross or access the lower part but that is really badly slippery. I tried that option and that was pretty bad.The way to go up is out of the frame a few feet to the left. I tried to go up the steep wet grass on the left but that was bad![/caption] Your goal is to reach the long scree, hopefully covered with snow that you might have spotted while you were hiking up the river. The final scree is a bit deep so if you get too high it will be hard to go down to it, that said with angles of the scree the higher you go to cross the bushes the shorter the bushwhacking will be. Here is what I did, at first I went too high but then spotted another scree before the main one that was connecting to it so I went done to it and up the main. It worked out but I think the solution displayed on the picture before is faster and more straight forward. You just have to spot a clearing to cross. 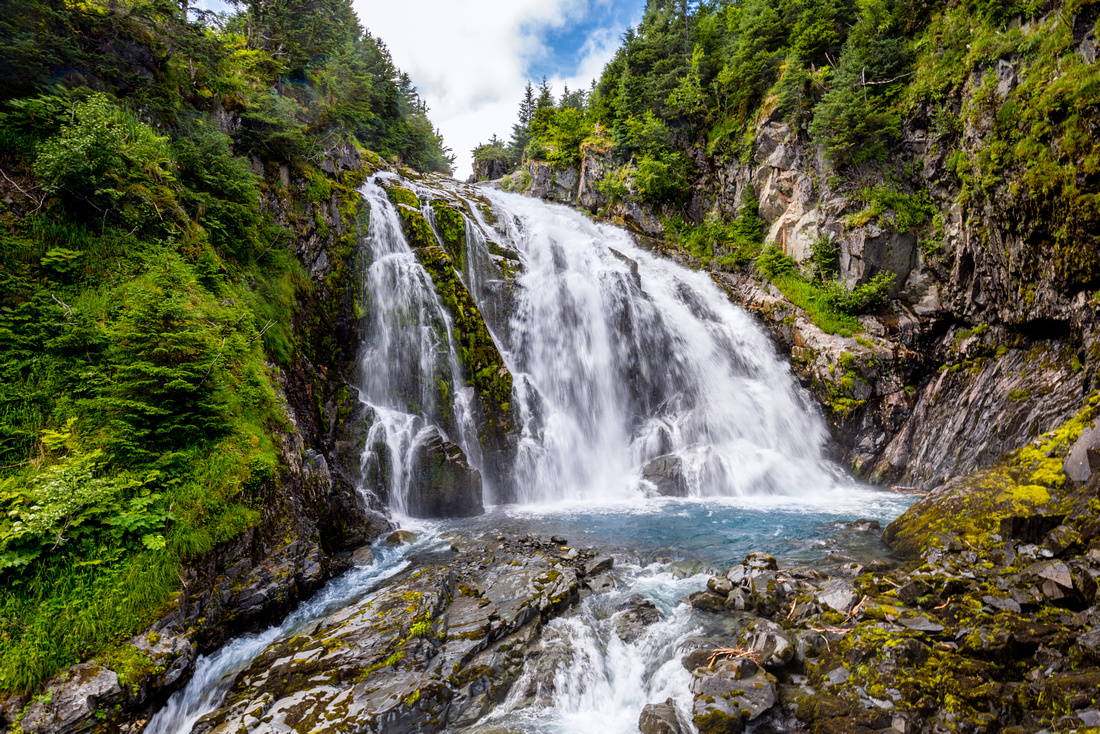 untitled-3505-EditA close up of this beauty

Once you reach the top you are in the easy, I mean still a lot of miles and ups and down but nothing tricky just route finding. I think it is better to go up the couloir until the end and then take the pass towards the lake. It is beautiful, not much up and down and straight forward. While the way I used to go in... Oh boy, a lot of up and down and turn around because I got stuck by deep valley not portrayed on this google earth view. The pass should be obvious on your right once you reach the plateau at the top. Then it is pretty much straight (North) through the two lakes and the other pass until you reach an amphitheater. Once the amphitheater/valley crossed, I used a little balcony to get up and then tried to climb the little hill as the lowest part always get really deep cut due to the poor quality of the rock so the higher you are the easier it will be. I had a visual on where I wanted to go (the ridge) so then I just navigated through the snow fields and scree until I reached the ridge. Try to stick to avoid to go south as you might get stuck in deep valleys, west is a good bet though and mostly flat. Stock up on water before the ridge as it is pretty dry.  Once on the ridge you can do what I did which is follow the ridge all the way until the terminus, it is pretty easy walk most of the time except a really eroded area where the mountain fell apart on itself, so big moving rocks and unstable area but it is pretty short. Or setup a base camp and go explore! :D 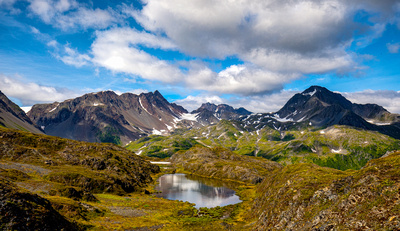 untitled-3555-EditFinally in the alpine. The route finding was pretty challenging, going up really steep scree and snow. I had to turn around a few times to try a new route but I made it. Then I thought, Oh I am almost done... I was done with bushwhacking but this area is full of up and downs and really deep valley. So you constantly have to turn around and climb back to avoid those valleys 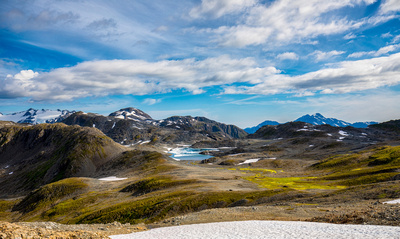 untitled-3642-EditI took a relaxing break there, trying to memorize the landscape to make the way back easier. It seems that going along that lake would be a better option. I was as well trying to relax as I was already at my second bear encounter and on this terrain with a lot of hidden up and down.. It is not reassuring. 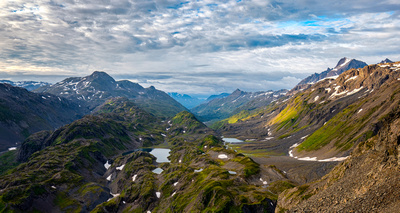 untitled-3718-EditThe north view, a lot of terrain to explore in that direction, especially if you have a packcraft as you would end up on the exit glacier road. 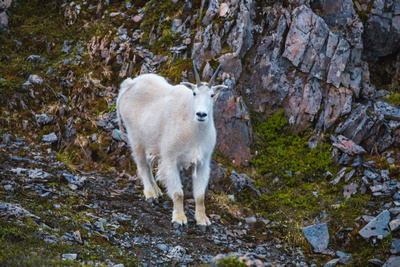 untitled-3947-EditSame goat checking me out

untitled-4020-Pano-EditSame panoroma of the sunrise this time. 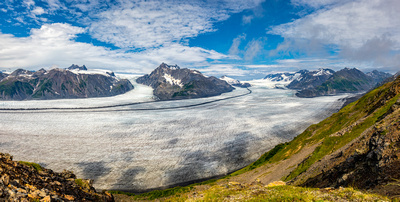 untitled-4153-Pano-EditThe sun made an appearance while I was walking back, colouring those patch of grass and providing some nice shadows.

untitled-4166-EditBack at the lake, I chose another route this time in order to avoid the numerous ups and down. 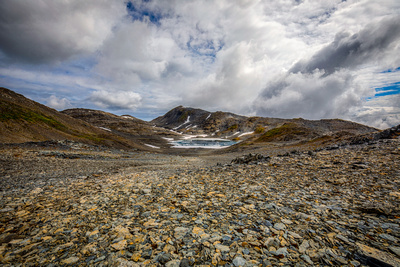 untitled-4170-EditThat way ended up wayyy nicer and faster. I didn't bring a map as I wanted to do it from memory well.. My legs paid the price. 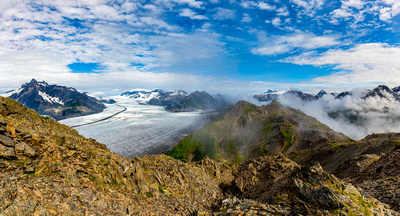